We watched the Ireland v Russia rugby match (Ireland won 35-0) in school on Thursday, during the time we covered the whiteboard with facts pertaining to the Irish team players, their ages, the teams they played for, their weight etc. the pupils had to research the players info on the iPad and put it up on the board.

It was very interesting to compare ages, and find out who was the oldest and the youngest. How many players representing each province were over in Japan. And who was the heaviest and the lightest player in the Irish team.

The Eiffel Tower is also known as the Iron Lady. It weighs about 10,000tonnes. It is a wrought-iron lattice tower designed by Gustave Eiffel. Some pupils constructed their own Eiffel Tower on paper.

We read this novel as it linked into our project on Japan, it gave the pupils an insight into World War 2 and the horrific long lasting effects of the dropping of the Nuclear Bomb in Hiroshima and Nagasaki. It is a sad but inspirational story of strength, resilience and bravery.

This month we have made Shepherd’s Pie, with mince, onions, carrots, peas and potatoes. Each pupil had a job to do and we devoured our Shepherd’s Pie for lunch afterwards. it was yummy!

We also made Apple slices with apples from the school grounds. We stewed apple and let it cool. We made a sponge mixture from sugar, butter, flour, eggs and butter. Then we got a large rectangular tin and put shortcrust pastry down as a base. After that we spooned on the stewed apple, then we spooned on the sponge mixture. We put it in the oven for about 50 mins and allowed it to cool before eating it. 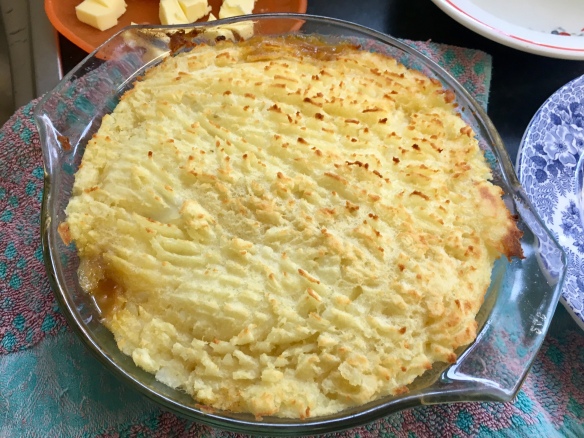 We made a big poster about the novel Sadako and the Thousand Cranes and spent an afternoon making origami paper cranes just like Sadako did.

Happy Birthday to both Gabrielle and Dia, who celebrated their birthdays in October

As part of our Rugby World Cup project we put together a rugby jigsaw from a template. It had information about the first Rugby World Cup in 1987 won by New Zealand and the history behind the Webb Ellis Cup (named after William Webb Ellis, the cup is also known as “Bill). 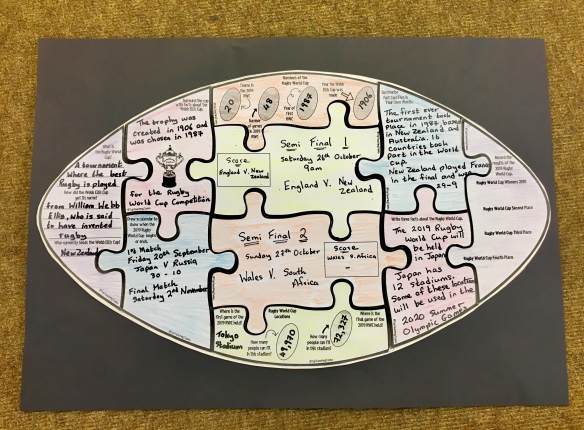 The pupils decorated their own masks, you can see they are very individual and very striking and terrifying. They used paint, string, wool to design their masks.  Well done! They are fantastic.

Some pupils are reading Toro! Toro! by Michael Morpurgo set in the Spanish Civil War. It is the story of a young boy growing up in Andalucia in Spain on a farm, rearing bulls specifically for the bull fighting ring. This book was illustrated by Michael Foreman.

In History we have been learning all about Ancient China and the ruling Dynasties.  We have read about the Silk Road, The Great Wall of China, the silkworms making silk and the Terracotta Army. We have been cutting out our own terracotta army.

A week ago there was a great weekend for National and international world Records. We learnt about Coco Gauff a 15 year old winning a major tennis tournament and Eliud Kipchoge for running the marathon in under 2 hours. Then we looked at Rhys Mcclenaghan, an Irish competitor who won bronze on the pommel horse in the World Championships. We also learnt about Simone Bikes winning her 25th world medal at the World Championships 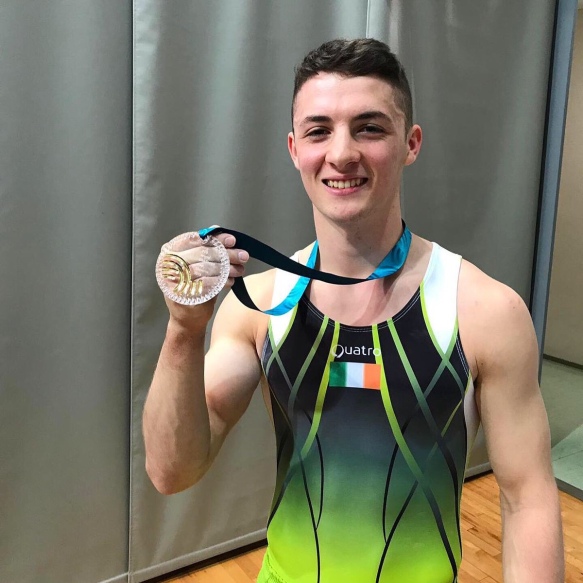 Other pupils are reading Poppy Field by Michael Morpurgo. The story is about a little boy called Martens Merkel, who lived beside a poppy field and the great stories told to him by his grandfather about the poem “In Flanders Fields” and the history of the poppy. The book is beautifully illustrated by Michael Foreman.

We made meringues in school today, they were so light and chewy! We learnt how to use a piping bag (more difficult than it looks) to make meringue shapes. Tadhg and Dia did a great job of whipping the cream. Then we made s sandwich of two meringues placing cream in the middle and adding the final touch of grated chocolate. 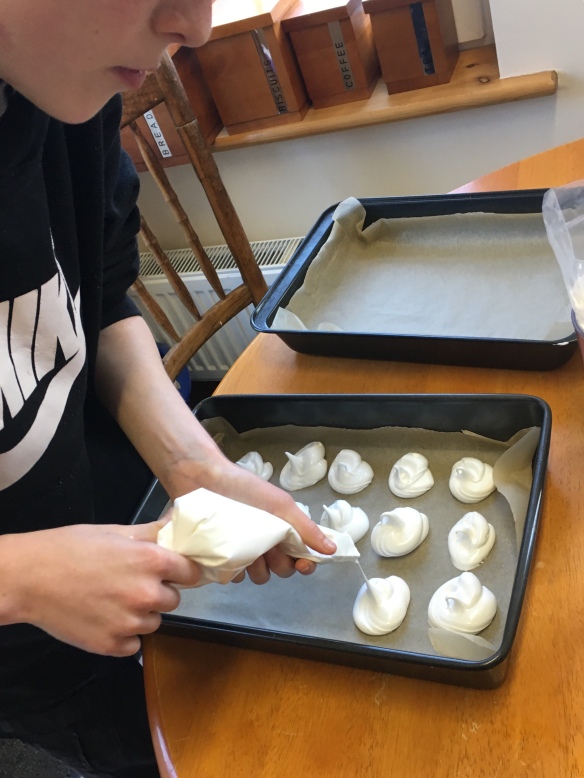